The illustrious history of tea began in ancient China, in 2737 BC. According to legend, the Chinese Emperor Shen Nung was sitting under a tree when some leaves from the Camellia sinensis tree blew into the drinking water his servant was boiling, thus creating the first green tea infusion. Since then, tea drinking has become a vital part of East Asian culture. In Japan, where the custom was introduced by Buddhist monks, tea ceremonies became a revered ritual of everyday life, and are seen as the keys to good health and wisdom. In the West, tea was introduced to Europe - particularly Portugal and Britain - by traders and missionaries. The formation of the British East India Company in the 1600s was particularly impactful on the development of the tea trade in Europe. The rest is history.

Today, tea is a cherished beverage enjoyed by people worldwide - hot, cold, and in every infusion you can think of. Taking a moment to enjoy a cup of tea is also widely seen as an act of self-care, and for good reason. Studies have found that some teas contain an array of health benefits, including having high amounts of antioxidants and antimicrobial qualities, helping with weight loss, reducing the risk of cancer, heart disease and diabetes, and encouraging mental clarity and relaxation.

Why tea is good for you

While there are various types of teas - green, black, white, oolong, and more - they are all derived from the same Camellia sinensis tree. The differences lie in how they are processed. You may gravitate towards one kind or another as a taste preference, but you should know they contain different health benefits.

Green tea is made from brewing unprocessed and unfermented tea leaves. As such, green tea contains the highest levels of polyphenols. These are micronutrients packed with antioxidants, such as flavonols, which confer a number of highly-regarded health benefits, including protecting the body against disease, boosting metabolic rate, and improving brain function. Green tea should be prepared with water that is not too hot, as it may burn the leaves. Both matcha and sencha are made from green tea leaves.

Black tea is processed green tea that undergoes an oxidization process known as fermentation which turns the leaves deep black. While black tea contains a lower level of polyphenols than green tea, it still contains antioxidants and other anti-inflammatory compounds that provide health benefits that may prevent chronic diseases. It should be brewed with boiling water, and steeped for about three to five minutes. Popular black tea options include Earl Grey and chai.

Oolong tea a distinctly mellow tea, is somewhere in between green and black tea, being a semi-oxidized tea. Oolong tea also contains l-theanine, an amino acid that promotes relaxation. Due to the antioxidants and EGCG content (which is present in oxidized teas, such as black and oolong), sipping oolong tea offers plenty of health benefits, including promoting weight loss, bone health, protecting against heart disease, diabetes, and more.

White tea is a delicate variety, and so named because the Camellia sinensis leaves and buds are picked when they are not yet fully open, and are still covered in fine white hairs. This is the least processed type of tea, and is uncured and unfermented. As such, it contains the highest concentration of antioxidants.

To caffeinate or not?

Caffeine naturally occurs in the tea plant, and thus all varieties of tea contain some caffeine. There are a few factors that determine the amount of caffeine in your tea. Firstly, the variety: black tea is typically highest in caffeine, containing nearly double the amount found in green tea. Secondly, tea bags containing broken tea leaves will have more caffeine than whole leaves. Finally, the longer you let the tea steep, and the higher the temperature of the water in which the leaves are steeped, the more caffeine will be released from the teas.

In moderation, caffeine can be enjoyed as part of a healthy diet, and tea contains about half the caffeine content as coffee. Tea lovers, especially of the matcha variety - a concentrated green tea - may especially enjoy the increased mental/cognitive acuity and energy boost it provides, due to the combination of caffeine and l-theanine. Decaffeinated teas are an option for those who want to limit their caffeine intake. However, because the decaffeination process also removes valuable polyphenols/antioxidants, the health benefits will not be nearly as potent as regular tea.

Herbal teas, also known as infusions, are caffeine-free because they don’t come from the same Camellia sinensis tea plant. These include fruit teas, chamomile, ginger, rooibos, elderberry, and others. Herbal teas are a great caffeine-free and healthy option that contains antioxidants and vitamins, which are great for protecting against disease, infection and stress.

The importance of organic tea

It is so important to choose organic tea whenever possible, as conventionally-grown teas may contain highly toxic pesticides, which will negate many of the benefits of drinking tea, and are more harmful than healthy to consume. In a startling report, the FDA found that imported teas contain high levels of illegal pesticides, including permethrin (a cancer-causing endocrine disruptor), DDE, endosulfan, and other derivatives of highly toxic carcinogens banned in the U.S. It’s important to remember: all teas are imported because the tea plants do not grow in North America, so they may contain all sorts of nasty chemicals and pesticides as mentioned above.

It is essential to choose only those teas certified as organic, as they ensure no chemical fertilizers, herbicides or pesticides are used, and are grown only via sustainable and ethical farming methods. We recommend Eden Foods’ high-quality line of Organic Tea & Matcha products, grown using traditional handling methods under the strictest organic practices. Here are some of our favourites.

If you’re looking for a tea rich in flavour and nutrients, then you’ll find this concentrated green tea powder a matcha made in heaven. Eden Matcha is an organic, hand-harvested, stone-ground green tea powder that packs a high amount of antioxidant polyphenols and EGCG. A cup of this fine, ceremonial-grade tea will help enhance mental clarity/brain function, boost energy levels and support mental and physical well-being. 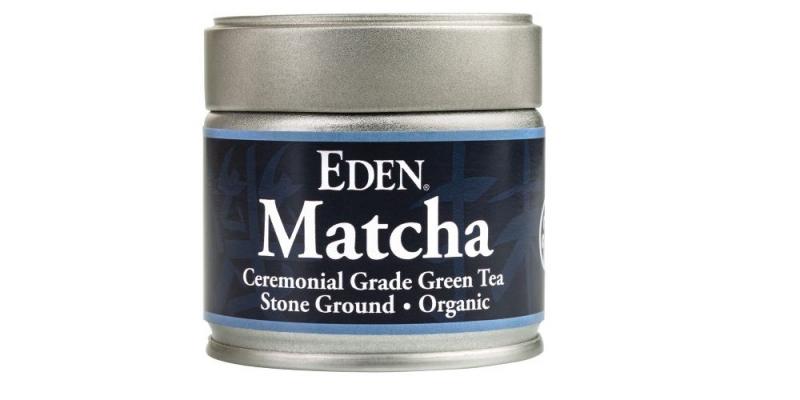 It’s easy to see why this is the most popular variety of tea in Japan, with its soothing and uplifting flavour of fresh green tea leaves. Eden Foods’ Organic Sencha is organically grown on a remote, centuries-old tea plantation near Uji, Japan, from leaves that are shaded/protected from the sun. These hand-picked, tender leaves of spring are immediately steamed and rubbed to prevent oxidation, to capture the vital antioxidant benefits in every cup. 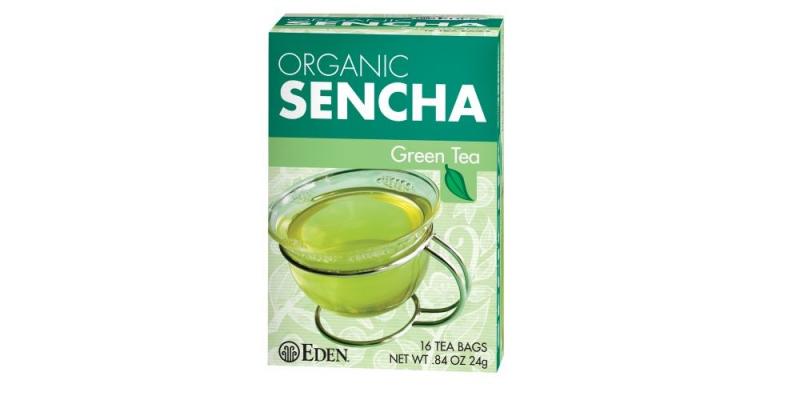 Is a soothing and balancing tea made from a blend of tea bush stems and twigs. Eden Organic Kukicha Tea is crafted using a unique process from four different clippings. The first clipping is from semi-wild plants, while the second consists of thick twists harvested every ten years in mid-winter. The third and fourth clippings are done in March and April and consist of small twigs, stems, and mature dried leaves. The result is a unique tea with a distinctive flavour and aroma. For children, try mixing 50% Kukicha with 50% apple juice for a delightful beverage. 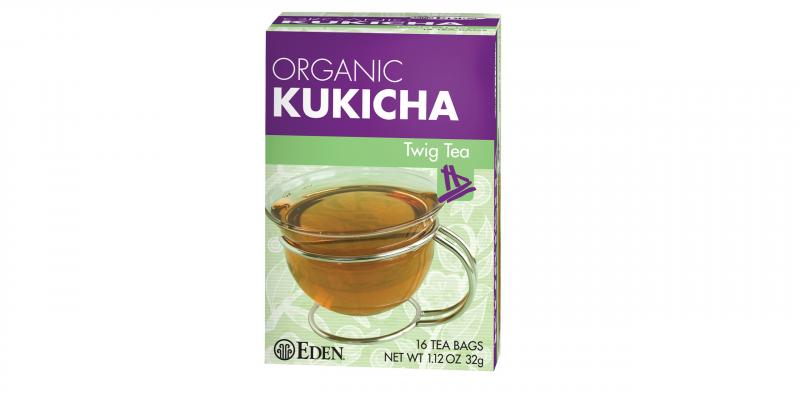 The rich tea contained in Eden Foods’ Organic Hojicha is made from hand-picked, larger and older organic tea leaves. They are harvested in the early summer, then slowly gas fire-toasted, which brings out a deep, rich flavour reminiscent of English tea. It can be served hot or cold. Despite the similarities in flavour to black tea, this hojicha is not oxidized and therefore retains much of its antioxidant health benefits. Also comes in Hojicha Chai Roasted Green Tea. 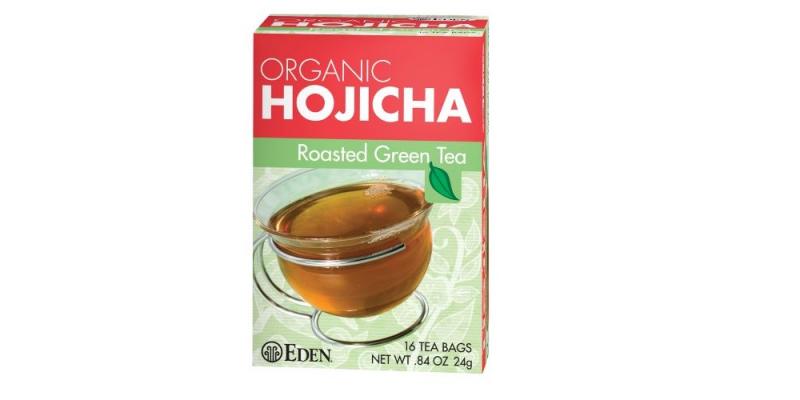 The name comes from the Japanese genmai, meaning brown rice, and cha, meaning tea. This exciting combination of flavours and aromas blends traditionally-cured organic sencha green tea leaves and roasted organic brown rice. Young, tender spring leaves are picked and immediately steamed to preserve antioxidants. Eden Organic Genmaicha can be enjoyed hot or chilled, and is a soothing and healthy drink for any season. 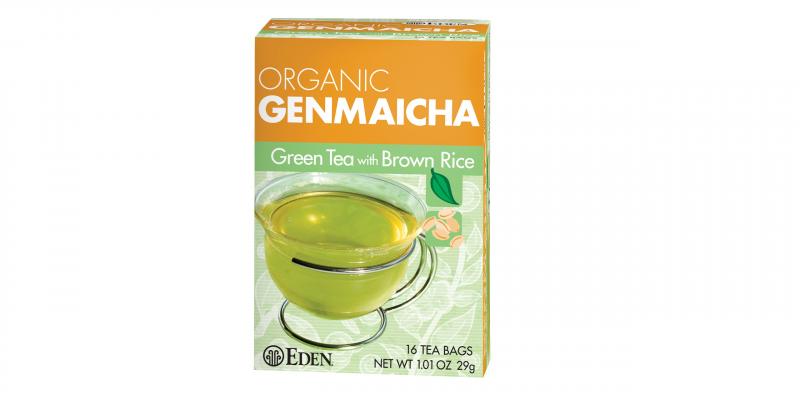 When you’re looking for calming and soothing tea, Eden Organic Chamomile is the ultimate choice. This non-caffeinated herbal tea (infusion) is made from organically grown chamomile flowers in Northern Egypt that are harvested as soon as they bloom and then sun-dried. The result is a beautiful and delicious cup of golden tea, with sweet floral notes reminiscent of apple, and which helps maintain digestive and nervous system health. 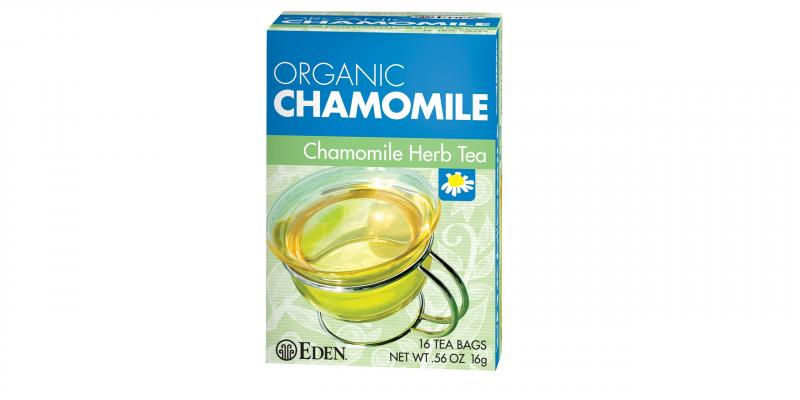 What’s your cup of tea?

With so many organic tea options to choose from, we recommend a Tea Sampler (or two!) which contains an assortment of the finest organic teas to help relax and refresh your mind, body and spirit.