Why Tracking Ovulation is Important for Monitoring Women’s Health

The “fifth vital sign” is about more than menstruation
By Dr. Courtenay Boer, ND, 29 April, 2019

If you’ve visited the doctor before, then you’ve probably had your vital signs checked. Conventional vitals include blood pressure, heart rate, respiratory rate, and temperature. These signs give basic insight into essential bodily functions and overall general health and are critical to screening for and monitoring medical issues. But did you know that a fifth vital sign has been recognized in women? That’s right! The American College of Obstetricians and Gynecologists (ACOG) has identified the period as a critical indicator of many aspects of overall female health.

As we begin to understand more about the many functions of both estrogen and progesterone, the importance of regular menstrual cycles is being illuminated. The ACOG states that “just as abnormal blood pressure, heart rate, or respiratory rate may be key to diagnosing potentially serious health conditions, identification of abnormal menstrual patterns in adolescence may improve early identification of potential health concerns for adulthood.”

The role of estrogen and progesterone in female health

What are these potential health concerns that may be related to menstrual irregularities? Fertility, as well as breast, uterine, heart, and bone health can all be profoundly impacted by the balance of estrogen and progesterone. While our attention is often focused on the menstrual bleeding itself (menses), mid-cycle ovulation is actually equally important to pay attention to. It is through ovulation that the corpus luteum is formed, and from this, the majority of our progesterone is secreted to maintain the crucial balance of estrogen and progesterone in the body. The scope of influence of that balance is vast.

Most prominently, fertility is greatly impacted by estrogen and progesterone. Both are necessary for regulation of menstrual cycles (which is crucial for conception), but also for maintenance of a pregnancy once conception happens. Anything that disrupts this balance (such as irregular periods, polycystic ovary syndrome, thyroid abnormalities, or hyperprolactinemia), can have serious consequences for fertility and the security of a pregnancy.

In breast tissue, estrogen stimulates growth while progesterone mediates the development of mammary glands, and antagonizes estrogen. When progesterone levels in relation to estrogen are deficient, estrogen’s proliferative effect on breast tissue can become unbalanced. This can lead to cyclical breast pain or fibrocystic breasts, and even more concerning can predispose women with progesterone deficiency to an increased incidence of breast cancer. Natural progesterone therapy (as opposed to synthetic progestins) has been shown to be protective and preventive of breast cancer.

When it comes to heart health, estrogen has been shown to have anti-inflammatory and cardioprotective effects. There is a strong association between menopause and cardiovascular disease incidence in women, and hormone replacement therapy can offer considerable protection from coronary artery disease. While progesterone has not garnered as much research, preliminary studies signal progesterone’s role in prevention of atherosclerosis and maintenance of healthy cholesterol levels.

Both estrogen and progesterone are crucial for maintaining bone mineral density. Progesterone is directly bone-building, while estrogen slows bone loss. Estrogen deficiency (such as in menopause) can lead to accelerated bone loss, while progesterone deficiency can affect the body’s ability to build bone and has been strongly correlated with increased bone loss.

The role of hormones in ovulation and menstruation

Now that we know why estrogen and progesterone are important for the bigger health picture, we can begin to make sense of how monitoring ovulation can tell us about our general health by understanding hormones’ particular functions within the fifth vital sign. It begins with taking a look the menstrual cycle and the normal hormonal fluctuations that happen. 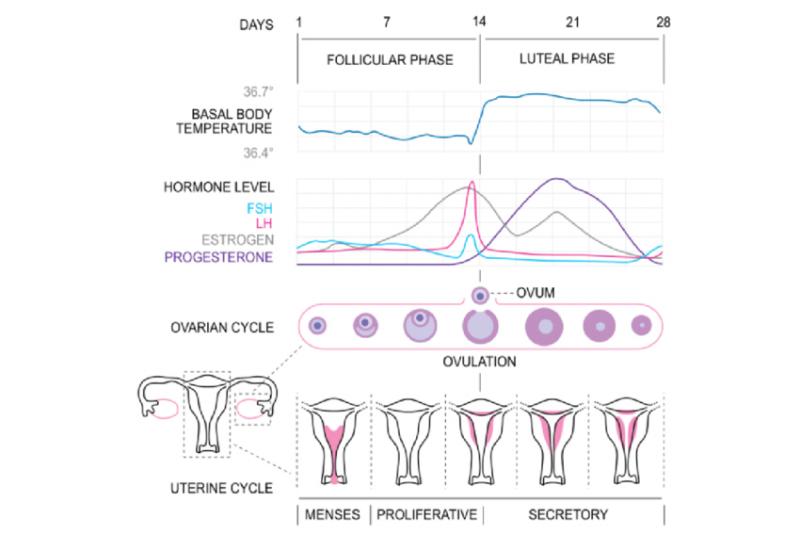 Elements of the menstrual cycle

Two which are produced in the pituitary gland in the brain

And two which are primarily produced in the ovaries

The follicular phase (starting on the first day of menses), when FSH is secreted from the pituitary to stimulate the ovaries to do two things: firstly, to produce a follicle (which houses the egg or ovum) and secondly, to produce estrogen.

The luteal phase (at mid-cycle), when estrogen stimulates LH to rise, resulting in an “LH surge” which tells the ovary to release the egg from the follicle (ovulation). In the luteal phase, the corpus luteum (remnants of the follicle that released the egg) produces progesterone. Progesterone is important to maintain the uterine lining in preparation for pregnancy and falling levels of progesterone near the end of the cycle are important for the shedding of the lining (menses).

Tracking the signs of ovulation

Equipped with this knowledge, tracking both your period and ovulatory signs allows a deeper understanding of the fifth vital sign. This can be done in a number of ways, but the most common is known as the Fertility Awareness Method (FAM). Though the name makes it sound as though it is intended to be used to achieve conception, awareness of the fertile window also makes this useful for contraception and to identify and lend more information about menstrual irregularities such as anovulation, amenorrhea (lack of periods), shorter luteal phase (a potential cause of recurrent miscarriage), and Polycystic Ovary Syndrome (PCOS) to name a few, giving insight into overall female health. FAM involves tracking waking (basal body) temperature and cervical fluid.

BBT tracking involves taking your temperature reading daily, first thing in the morning (ideally before getting out of bed). Progesterone causes your morning basal body temperature to rise slightly (typically less than 0.5F or 0.3C), so by tracking your daily temperature, you can start to see a pattern: lower temperatures in the first half of the cycle, followed by a rise in temperature at ovulation and sustained elevated temperatures post-ovulation. When done for several cycles, you will be able to see when you have ovulated (and started to produce more progesterone).

Cervical fluid changes throughout your cycle in order to become more habitable for sperm, becoming its most fertile in the days on and around ovulation. Infertile cervical fluid can be dry, sticky, or creamy while fertile cervical mucous is slippery and stretchy with an egg-white like consistency. It is often accompanied by a wet or slippery vaginal sensation and can often be seen as discharge. After ovulation, these secretions become more infertile (less hospitable for sperm) again.

There are several other ways of tracking ovulation including measuring cervical height (which becomes soft, high, open and wet—known as SHOW—during the fertile window), ovulation predictor kits (OPKs, which measure LH in urine), and having your doctor test progesterone levels in the blood. Incorporating BBT and cervical fluid tracking is a solid and accessible starting point to assess your fifth vital sign.

Your cycle is yours to explore and develop mindfulness of and ovulation tracking is a simple and effective way to take charge of your female health. Tuning in to your body and cycle provides great insight into both your hormonal health and overall health status and can be deeply empowering. If you experience menstrual abnormalities or difficulties, know this is not normal or something you should accept as your “lot in life”! It’s important to have a proper assessment done with a primary health care practitioner that you feel comfortable working with and who takes your concerns seriously. This and being able to present confident knowledge of your own body will go a long way toward finding the root cause and creating a treatment plan specific to you.

For the analog egg tracker

For the digital fertility follower