Red Gold: The Benefits of Saffron

Brought to you by
AOR

Nicknamed "red gold" for its characteristic red strands and high value (sometimes exceeding the price of gold itself!), saffron is the most expensive and coveted spice in the world, with a price tag as high as $45,000 per kilogram. Saffron commands such a high price because it must be laboriously harvested from the flowers of the Crocus sativus by hand, and there are nearly 200,000 of these flowers in 80 grams of saffron herb. What's even more extraordinary is that saffron has been cultivated and used in medicine for more than 3,500 years.

Saffron has traditionally been used for its health benefits, as well as being a fragrant cooking spice and dye long-revered for its radiant yellow hue and potent aroma. This prized herb, which has over 150 identified compounds in its flowers, has been used in a wide range of remedies for inflammation, mood irregularity, premenstrual syndrome, and much more. Saffron has also been used in ayurvedic medicine for an array of benefits, including balancing mood, pain relief, postpartum depression, and for promoting restful sleep. Traditional medicine practitioners also appreciate saffron's antibacterial, antifungal, anti-inflammatory, antispasmodic, antidiuretic, antidepressant, and antianxiety properties. These are only a few of the reasons why saffron is highly regarded among natural health practitioners for its powerful curative and therapeutic benefits for mood, homocysteine levels, anxiety, and more.

The science behind using saffron for depression

Depression is one of the most prevalent causes of disability in the world, affecting up to 21% of the world's population. Treatment options for major depressive disorders usually involve SSRIs, a synthetic class of medication that often involves a large number of potentially harmful side effects, including weight gain, loss of libido, drowsiness, and increased risk of suicide. For millions worldwide who suffer from depression, there is a tremendous emotional, financial, and physical toll to suffer when their condition is left untreated. Fortunately, one of the most reliable and well-understood benefits of saffron is its efficacy as an antidepressant.

Today, many clinical studies are confirming the traditional wisdom of using saffron to combat mood disorders. By focusing specifically on saffron’s antidepressant capabilities, researchers have found that saffron functions analogously to prescription antidepressants in the reuptake inhibition of dopamine, norepinephrine, and serotonin. Of particular interest to new parents is a 2017 randomized clinical trial including 60 new mothers which also found that saffron seemed to help improve symptoms of postpartum depression. These scientific studies support what holistic health practitioners have known about the legendary spice for some time: saffron helps maintain healthy serotonin and dopamine levels and provides an effective natural alternative to pharmaceutical medications in treating anxiety and depression.

Let's take a closer look at how saffron’s unique chemical compounds and active constituents work together to provide these natural mood balancing benefits.

Therapeutic benefits of crocin and safranal

Crocin is the naturally occurring pigment that gives saffron its characteristic bright yellow colour when cooked, and one of saffron's main carotenoids and active components. For humans, carotenoids act as an antioxidant, protecting your cells from oxidative stress by fighting free radicals - harmful environmental compounds - that damage cells and thereby accelerate aging. On the mood-balancing side, crocin also possesses therapeutic benefits that are effective for treating depression. Furthermore, evidence shows that crocin can prevent learning and memory impairment and mitigate damage to the brain caused by chronic stress.

Safranal is another beneficial organic compound found within saffron. Since its discovery approximately eighty years ago, safranal is thought to be the source of saffron's distinctive scent, and used for its natural aromatic properties in essential oils and perfume. Less known, however, is that safranal contains significant antidepressant and antianxiety properties. Safranal works on the GABA-A receptor complex, a neurotransmitter that acts as the central nervous system's chief inhibitory receptors.

The brain and the nervous system comprises billions of nerve cells, called neurons. Neurotransmitters such as norepinephrine, dopamine, and serotonin are chemical messengers that carry information between neurons or from neurons to muscles. These chemicals and their interactions are involved in controlling body and nervous system functions like mood and sleep. Saffron's active components can help regulate these functions and improve deficiencies by providing natural support for these neurotransmitters that modulate various vital processes, such as regulating stress in your body.

It is for these reasons that researchers support saffron's positive role in managing depressive symptoms via mechanisms and effects similar to prescription antidepressants. Saffron may also raise serotonin levels (the "feel good" hormones in the brain), which plays a significant role in its antidepressant activity.

Lastly, during the winter months with cold and flu season, Saffron can also be used for its immunoregulatory benefits. Scientific studies continue to reveal novel health benefits of an all-natural saffron supplement as more research is conducted.

Unfortunately, because of its high cost and labour-intensive cultivation, many saffron products purchased over the counter are adulterated with cheaper herbs. However, there are a few places you can still source pure and potent saffron supplements to support your health. Advanced Orthomolecular Research (AOR) saffron capsules are safe for most individuals with dietary restrictions, since they are made without wheat, gluten, corn, nuts, peanuts, sesame seeds, sulphites, mustard, soy, dairy, eggs, fish, shellfish, or animal byproducts - which are, sadly, something you must watch out for in many big-box-store supplements. 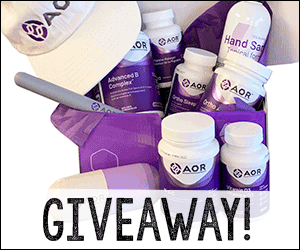 Sourced from Iran, AOR's saffron is a pure, standardized distillation that extracts and preserves the main active compounds of saffron flowers without causing any excess damage to the crop. You can rely on AOR saffron to not only provide natural mood support, but also as a support for many other health and wellness concerns, including premenstrual syndrome, generalized anxiety and depression, postpartum depression, indigestion, inflammation, insomnia, and other mood irregularities. AOR's high-quality product is backed by its proven track record in innovation and an unparalleled reputation regarding the purity and potency of the one and only “red gold.”

Please note: You should always consult a medical professional before starting any new treatment.

At AOR, our vision is to transform health through natural, personalized, and therapeutic care. We seek to catalyze change and challenge conventions through continuous innovation. For twenty-eight years, it has been our mission to transform scientific research into evidence-based, natural health products that empower people to lead their best lives.