Summer sparkles with these bright bugs
By Jacob Rodenburg, 21 May, 2019

Ah, the gentle flash of a firefly. Tiny bursts of star-like light punctuate the dark like the dots and dashes from some long-forgotten Morse code, telling us that summer is well and truly here. Here's how to have some firefly fun with a little know-how and a gentle touch!

Come on baby, light my fire!

Technically a beetle, fireflies or “lightening bugs”, as they are also called, have a special organ in their abdomen that can mix oxygen together with a pigment called luciferin and the enzyme luciferase. When the insect flies upward, these chemicals interact and create a flash — a small pulse of light. As the insect descends, the flash turns off. When a female of the same species sees the flash, she responds with her own light signal. The males and females keep this “light” conversation going until they find each other. And then, you guessed it, they mate. Some fireflies flash just once, while others give off flash “trails” of up to nine sequenced pulses. Still others create unique aerial displays by dive bombing downward and then abruptly ascending to form a “J” pattern of light.  A few species waggle their abdomens from side to side and appear to be twinkling, just like a distant star.

It's not just the adults that glow! In some species, the eggs emit a delicate, white light. A mated female lays about 100 or so in the moist soil around mid-summer. The larvae (or grubs) hatch out about three to four weeks later. Resembling a flat, armour-plated worm, they hunt for slugs, worms, snails, and other insects. And just like a small glow stick, some species of larvae also give off that same soft light! Look for them in moist leaf litter or soil.

The larvae molt (shed their exoskeletons) as they grow and overwinter in this stage. Some species remain larvae for as long as two years. Eventually they build a small chamber in the mud or, depending on the species, they may attach themselves to the bark of a tree. In this pupal stage, a wondrous transformation called histolysis takes place. The larvae morphs into the elegant, winged beetle that has the amazing ability to flash its rear-end on and off. Now wouldn’t that be an interesting skill to have! 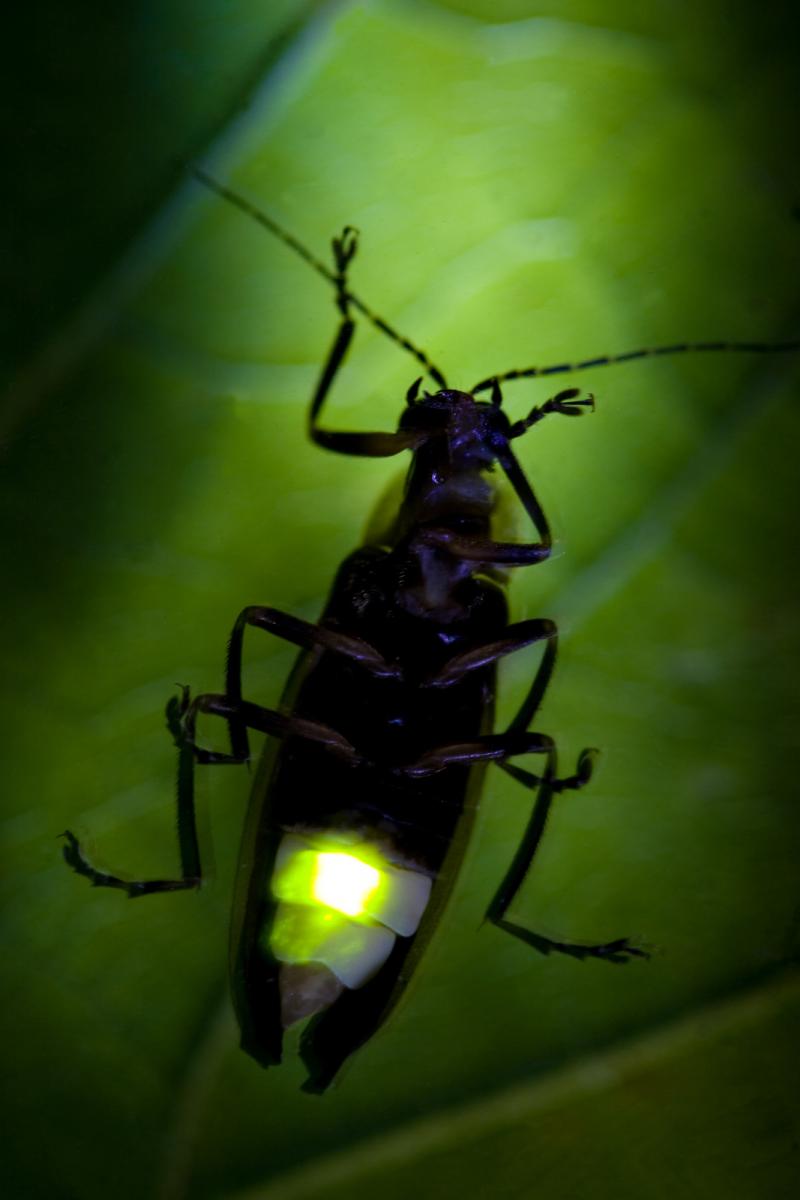 Follow these tips to encourage fireflies to come visit!

Can you “speak” firefly?

If you have a wrist watch that glows, or a flashlight, try imitating the pattern of flashes. If you are using a flashlight, place a blue piece of tissue paper over the lens. Fireflies, according to scientists, seem to react more to blue light than white light. Remember, different species of fireflies flash at different rates. Can you call in a firefly by mimicking the sequence?

If you move smoothly and carefully, you can catch a firefly with your bare hands. When they fly, they often stay on designated flying path. Simply follow them and wait until they land.  Try creeping up behind them, then gently reach out and  trap the firefly between your cupped hands. Be careful not to crush it as you transfer the firefly into a glass jar. This may take a few tries, but stay patient and determined and you’ll be able to create your very own firefly night light (see below).

Have a firefly “sleepover”

Enjoy nature’s very own nightlight — a glow that can inspire magic on those hot June and July evenings. Catch fireflies in a plastic ice cream tub and then gently transfer them to a glass jar once you get home. Make sure you pierce the lid to let in some fresh air. Add some leaves and a few drops of water or a moistened paper towel to keep the air inside humid. Lie in bed and watch your fireflies glow and let them go in the morning.

Want to learn more?  These activities come from the Big Book of Nature Activities, written by Jacob Rodenburg and Drew Monkman. On book shelves now!