The remarkable woman behind the APGAR score!
By Gill Polard, 12 March, 2019

Dr. Virginia Apgar, the woman behind the APGAR score, an assessment that a midwife or MD performs on newborns, helped pioneer a new way of providing maternal care. She focused attention on newborn mortality and was able to help obstetricians learn to look for signs of infant distress immediately after birth.

What is the APGAR Score?

The APGAR score is taken at one minute after birth to assess how well the infant fared during childbirth and then again at 5 minutes of life. If the 5-minute score is low, the test might be scored a third time at 10 minutes. The assessment covers 5 key areas: skin colour, heart rate, grimace response, activity, and respiration.

Dr. Apgar re-imagined maternal care globally, and was brave, intelligent, adventurous, strategic and, by all accounts, warm and fun-loving. The woman who developed the APGAR score was accomplished in many ways!

1. As a student in New Jersey during the early 20th century, Virginia participated on no less than seven different sports teams, performed in school productions, and was a regular contributor to her school’s newspaper.

2. After completing two years of a surgical internship at the Columbia University College of Physicians and Surgeons, she studied anesthesiology under Dr. Ralph Waters, an early pioneer in the field. At the time, many medical doctors considered anesthesiology to be beneath them as it was often practiced by nurses.

3. In 1938, Dr. Apgar became the first woman to head a division at Columbia University and Presbyterian Hospital when she was named Director of Anesthesiology.

4. Until 1946, when the validity of anesthesiology as a specialty was recognized within the medical profession, Dr. Apgar had been the sole staff member in the anesthesiology division and even had to write the text book for her students herself!

5. She was known to carry a penknife, an endotracheal tube, and a laryngoscope with her at all times just in case someone stopped breathing. 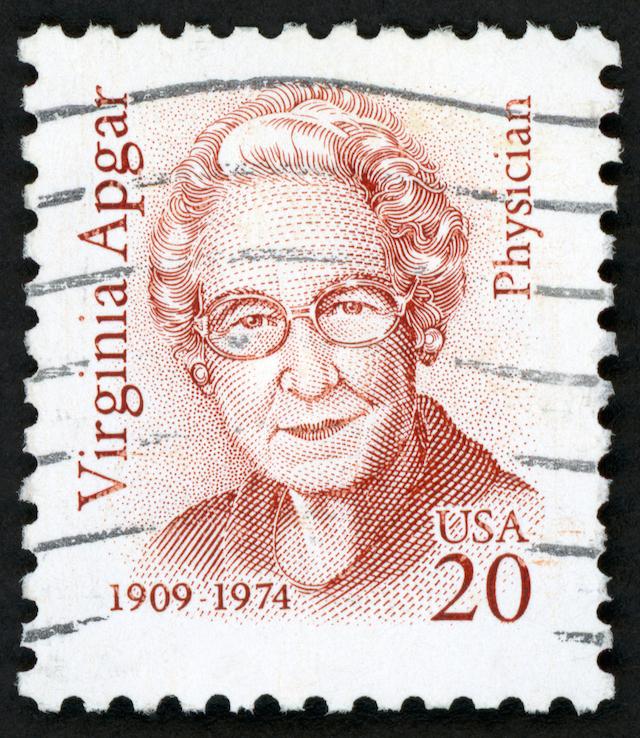 6. In 1994 she was commemorated on a U.S. postage stamp and in 1995 she was (posthumously) inducted into the US National Women’s Hall of Fame.

7. APGAR was not an acronym until 1962, when one of her students renamed the areas of focus to suit the letters in her name (Appearance, Pulse, Grimace, Activity, and Respiration), making it easier to remember - apparently she was delighted by this.

8. Over her incredible career and lifetime, Dr. Apgar published more than 60 papers and a book called Is My Baby All Right? with Joan Beck. The book is still available for purchase on Amazon.

9. Eventually she become interested in congenital birth defects and how the drugs that anesthesiologists administer might influence such an outcome. After joining the faculty in pediatrics at the Cornell University School of Medicine, Dr. Apgar became the first person to hold a faculty position dedicated to teratology (the study of congenital disabilities).

10. In 1959, Dr. Apgar left Columbia to lead the National Foundation - March of Dimes, where she raised awareness and funds for research into birth-defects.