modern twists on an old-fashioned snack
By EcoParent Magazine, 29 September, 2021

Popcorn is the quintessential snack food. It is inexpensive and easy to make, light but filling, and can be made salty, savoury, or sweet to suit every taste. A big bowl of popcorn is the perfect companion for family movie night or cuddling up in front of the fireplace on a chilly fall evening. It is no surprise that popcorn is one of the most popular snack foods in the world!

Corn (or maize) was domesticated around 10,000 years ago in what is now southern Mexico from a wild grass called teosinte, making it a cereal crop. Archaeologists have found evidence of popped corn from as early as 4700 BCE in modern day Peru. Popcorn “pops” when the water in its starchy endosperm is heated and cracks the hard outer shell. It is possible that popping dried corn was easier than grinding into flour, and provided nutrition more quickly.

The popularity of popcorn as a snack food spread across America beginning in the late 19th century, soon becoming mainstays of candy stores, baseball diamonds, and movie theatres. Stovetop popping at home later gave way to electronic air poppers, and the invention of microwave popcorn in the 1980s saw the consumption of popcorn skyrocket. But not all popcorn is created equal! How the kernels are grown and prepared influences whether or not the end product is truly a healthy snack.

The Trouble with Microwave Popcorn

Microwave popcorn was intended as an easy way to make movie theatre style-popcorn at home, but this convenience comes at a cost. In addition to the sheer volume of waste created by its non-recyclable bags, research has shown that several chemicals from flavouring to the coating of the bags themselves can lead to serious health issues.

The manufacturing of this product has been linked to a serious respiratory illness known as “popcorn lung”, a disease that results in obstructions in the bronchioles of the lungs. This damage is caused by a chemical called diacetyl, which is used to give microwave popcorn its buttery flavour and distinctive aroma. The “paper” bags themselves are also coated in several chemicals (which are likely carcinogens) designed to keep the popcorn from sticking to the inside and oils from leaking out. The FDA banned some of these chemicals in 2016, but since then dozens of new packaging coatings have been introduced, and their long-term effects remain to be seen.

If this concerns you, rest assured that there is no need to give up popcorn! By choosing organically grown, non-GMO kernels and popping them the old-fashioned way, you can easily prepare a snack you can feel good about.

Kernels of Truth: The Health Benefits of Organic Popcorn

Corn is the most commonly grown crop in the United States, with most of it being genetically modified. It also frequently appears on lists of heavily sprayed crops when grown conventionally. Though some harmful pesticides have been banned, these chemicals and others are referred to as persistent organic pollutants (POPs) and have serious implications for human and ecological health, even at very low levels. Choosing organic wherever possible is not only good for your wellbeing, but the planet’s too.

Organic popcorn is one of the best snacks you can eat. It is 100% whole grain, and low in both calories and fat while being high in fibre. Popcorn is also an excellent source of polyphenols, which are antioxidants linked to improved circulation and digestive health, and may lower the risk of certain cancers. Research has shown that a serving of popcorn contains roughly twice the amount of polyphenols as a serving of fruit, making it a great addition to your family’s snack repertoire. 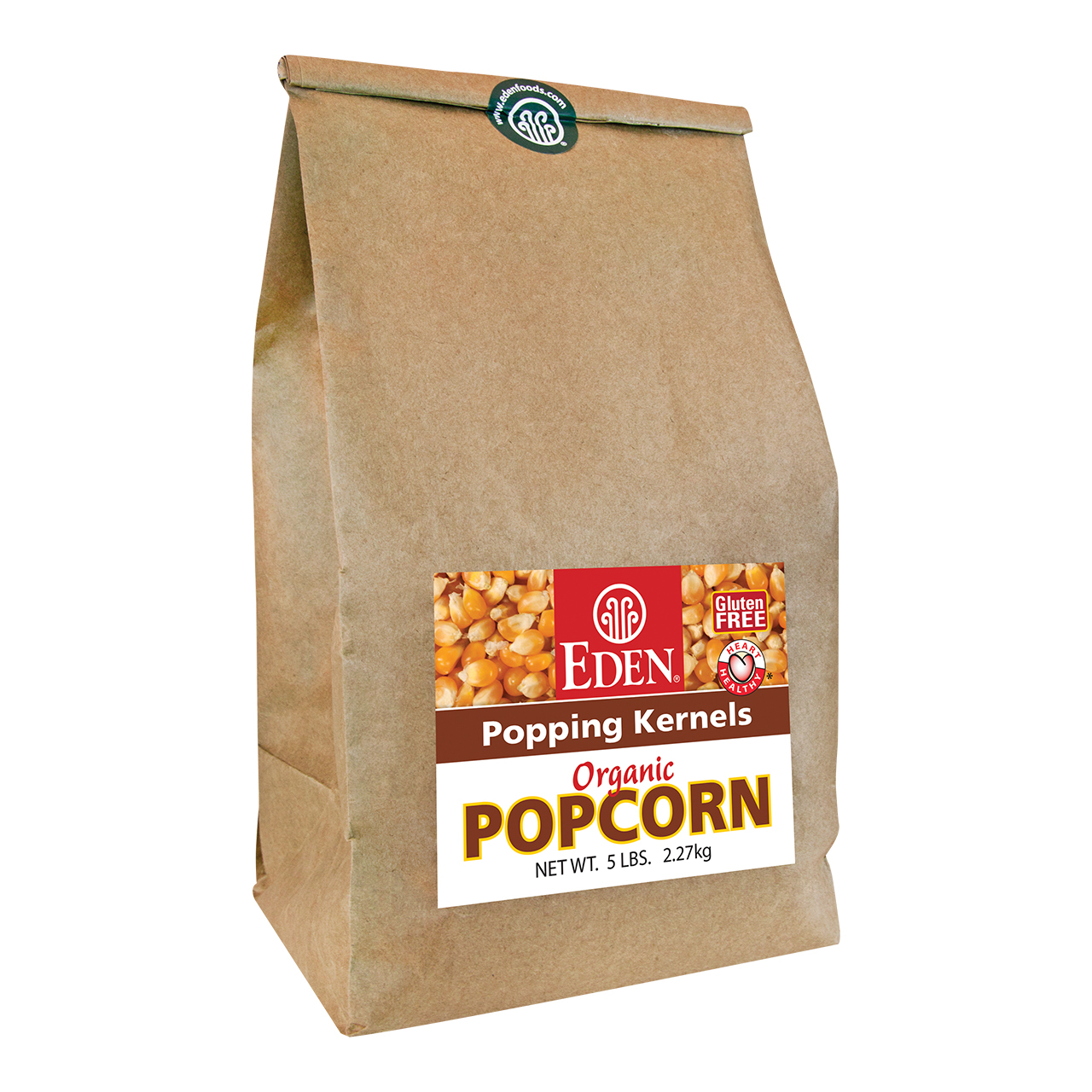 We recommend Eden Foods’ Organic Popcorn, a family farm variety of yellow corn that makes large, fluffy popped kernels. Let these be your blank canvas to experiment with different varieties from savoury to sweet! Some of our favourite toppings are Eden Shake (sesame and sea vegetables), Eden Gomasio (especially garlic or black and tan sesame), or this scrumptious peanut butter and chocolate chip recipe for the occasional treat.

Pop It on the Stovetop!

In addition to the kernels you choose and the toppings you add, how you prepare the popcorn makes all the difference to its health benefits. Making popcorn on the stove is a lovely way to slow down a little, and be mindful about the snack you are preparing.

This tried and true stovetop method can be done in a simple pot with or without adding oil. If using oil, it is important to choose the right oils to avoid burning the kernels or inhaling compounds in the resulting smoke. Choose organic oils with higher smoke points such as Eden Safflower Oil, Eden Sesame Oil, or Eden Toasted Sesame Oil, keeping in mind that the type of oil you use will give the popcorn a different flavour.

All you need is a large pot with a lid, Eden Foods’ Organic Popcorn, and a little oil. Remember that the finished popcorn will be much larger, so be sure to choose a large enough pot to avoid overflow.

Simply add a little oil to the pan and place it on the stove over medium-high heat. Add a few “test kernels” to the pot while it is heating. Once those kernels pop, add the rest of the kernels (½ cup is a good amount), shaking the pan frequently to coat the kernels, and moving the popped corn to the top. Remove from heat when the popping slows. Pour into a serving bowl, add your favourite toppings, and enjoy!

Leftover popcorn can be stored in an airtight container and makes a great school snack, or try this caramel corn recipe for a healthy twist on a classic fall treat! Whether you’re popping it on the stove or crafting homemade popcorn balls for any occasion, these tasty popcorn ideas will keep you and your family snacking happily – and healthily – all year round. Get popping!

You may also enjoy: A Sticky Subject: Toxic Non-Stick Chemicals.