We try to make sure that our families are getting all the vitamins and nutrients available from a healthy diet. Although we are well aware of the dangers and overuse of pesticides, it can still be shocking to discover that some of our favourite foods are laden with chemicals that have links to cancer, asthma, diabetes, and behavioural problems like ADHD. At the top of the most recent hit list of pesticide toxins that are sneaking onto our dinner plates is glyphosate, the world’s top-selling weed killer and key ingredient in Monsanto’s notorious herbicide, Roundup.

Glyphosate is an organophosphate chemical that inhibits photosynthesis (the process of making new tissue) in plants, making it a very effective weed killer. In fact, it’s so successful at inhibiting weeds, that each year roughly 826 million kilograms of glyphosate is sprayed on growing produce around the world.

Monsanto (now owned by Bayer) first introduced glyphosate to the market as Roundup in 1974. Most major North American crops, including wheat, barley, oats, pulses, corn, soy, and canola are largely dependent on glyphosate-based pesticides to expedite and improve harvest.

In 2015, the World Health Organization’s International Agency for Research on Cancer declared glyphosate a “probable carcinogen.” In 2017, California listed glyphosate in its Proposition 65 registry of chemicals known to cause cancer. Scientific studies on animals have also demonstrated that exposure to glyphosate is linked to hormone disruption, can adversely impact the digestive system by harming healthy gut bacteria, and may be linked to birth defects and reproductive health issues.

But despite this troubling conclusion, Health Canada decided in 2017 to continue to allow its use for another 15 years. To further convolute the matter, The Environmental Protection Agency (EPA) in the US also claims that glyphosate has “low toxicity for humans,” is no more than “slightly toxic to birds,” and is “practically nontoxic to fish, aquatic invertebrates, and honeybees.” Meanwhile, in sharp contrast, many European nations like France, Austria, and Germany are moving to significantly restrict or ban glyphosate—at the end of 2017, the EU voted to renew the glyphosate license for only 5 years.

The troubling thing about the presence of glyphosate in foods is that even though singular, low-level ingestion hasn’t yet been proven to be unsafe, exposure is accumulative, making its threat trickier to establish. Our children aren't just getting one or two sources of glyphosate every day, but multiple exposures—and the associated risks are adding up over time.

In a 2018 study conducted by Environmental Defence Canada to measure potential daily exposure to glyphosate, 18 common children’s foods were tested including breakfast cereals, hummus, and packaged macaroni and cheese. The results: 80 percent of the food products tested contained glyphosate, reaffirming a study conducted in 2015-16 by Health Canada, which found glyphosate in samples of grains, beans, peas, and lentils. In that study, more than 3 in 10 samples of infant cereal that were tested contained glyphosate. While it might be initially reassuring to know that some of the amounts of glyphosate found in the test were, in fact, below the levels that Health Canada considers “safe,” new evidence emerging from a trial in the US suggests that the research on which safe levels are based may have been subject to corporate interference. 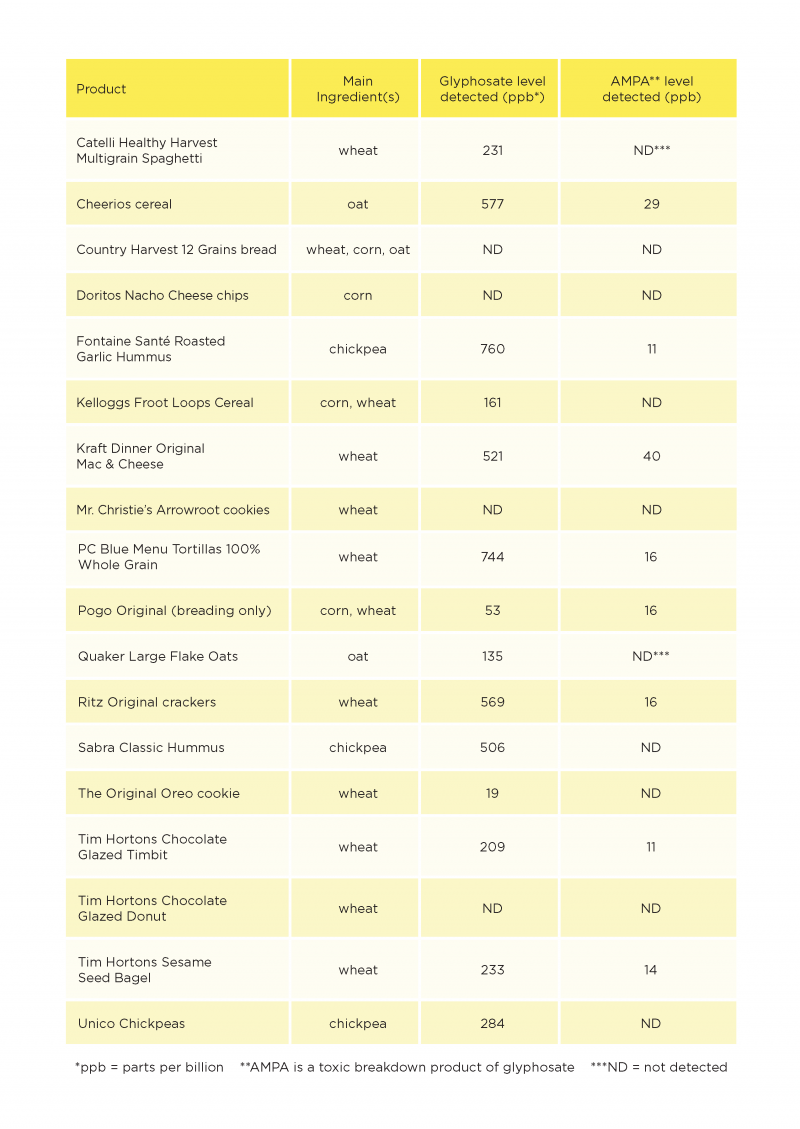 Similarly, Environmental Working Group (EWG) in the US conducted a study in early 2018 with oat and cereal-based foods and found that “almost three-fourths of those samples had glyphosate levels higher than what EWG scientists consider protective of children’s health with an adequate margin of safety.” Further, EWG published updated results in late 2018 focusing on 28 kid-focused breakfast cereals made with conventionally grown oats and manufactured by Quaker Oats and General Mills, both of whom had previously assured consumers that there was “no reason for concern.” Unsurprisingly, in all but two of the 28 samples glyphosate was found at levels above EWG’s health benchmark of 160 parts per billion.

Recently, the state of California awarded school groundskeeper, Dewayne Lee Johnson, a substantial financial settlement after he took Monsanto to court with a claim that after many years of using Roundup and other products containing glyphosate to maintain school grounds, he developed non-Hodgkin's lymphoma, a form of blood cancer.

Johnson’s victory wasn’t the only win in the case—it also shed light on a dark truth behind how glyphosate may have earned its approval for use. Lawyers uncovered thousands of internal documents, emails, memoranda, and reports, now dubbed “The Monsanto Papers” that showed Monsanto knew about the risks associated with glyphosate, and that company employees and operatives sometimes had an uncredited or unclear role in preparing or analyzing studies that were supposed to have been conducted and peer-reviewed by independent scientists.

Monsanto’s involvement in preparing or framing studies that were released as the work of independent researchers raises important questions about the extent to which governments who allow the use of glyphosate have relied on biased and compromised research in order to inform their decision to approve it.

Get the glyphosate out!

Glyphosate has permeated all elements of our environment—our water, air, rain, soil, and ultimately our food, making it hard to avoid as consumers. We need industry and government to act and we need to encourage them both through our words and consumer actions. Companies can eliminate glyphosate in their food by demanding a shift in their suppliers’ agricultural practices. And the government can protect us from the risks posed by harmful chemicals through policies developed out of robust, credible, and independent research. In the meantime, reduce your family’s exposure to harmful chemicals by selecting products that are certified organic and less likely to contain harmful toxins like glyphosate.