5 Things to Do for a Toxin Free Picnic

Is the warmer weather prompting you to pack a basket with your favourite snacks, roll out a picnic blanket, and spend some quality time in the park or on the beach? Especially when your kids are out of school, picnics are the perfect way to get them outdoors and staying active. But before you pack up your picnic supplies, you need to be aware of some of your basket’s most unwanted guests: endocrine (or hormone) disrupting chemicals. These harmful substances can mess with human hormone production, mimic hormones causing mixed messaging, and even cause cells to die prematurely. These effects are especially dangerous for developing bodies.

The good news is that you can enjoy the summer without exposing yourself and your family to harmful chemicals that hide in your picnic essentials with some easy steps. Here are five simple tips to make your next picnic in the great outdoors easier, more relaxing and toxic-free!

Say no to canned food

BPA (short for bisphenol-A) is commonly used in polycarbonate plastic bottles and to coat the inside of metal food and beverage cans to protect the contents from corrosive effects. While BPA prevents metal from leaching, ironically it’s the chemical itself that contaminates the food and liquids inside the can. BPA is a known endocrine (or hormone) disruptor, and has been linked to behavioural problems in children (like ADHD), early puberty, obesity and even cancer. In 2010, BPA was declared toxic and banned from baby bottles in Canada because of its harmful effects. Unfortunately, it’s still widely used in food packaging, especially food cans.

Environmental Defence and other organizations tested nearly 200 food cans from major retailers and brands in the U.S. and Canada. Regrettably, 19 out of 21 Canadian cans contained BPA and 110 of our 171 cans bought in the USA also contained this hormone disruptor.

Go fresh instead of canned. As many cans are lined with BPA-containing resin, cut back on them entirely. For example, if you’re making a bean salad for your picnic, use dry beans (which are way more cost effective anyway!) or those stored in a glass jar.

Like canned food, plastic containers may also contain a variety of harmful chemicals that can leach into the food we eat, especially if the plastic is exposed to heat. BPA is just one example, but there are many others to watch out for. For instance, phthalates may be present in plastic containers, including some water bottles. Like BPA, this group of chemicals has been linked to hormone disruption and other health problems.

Crack the code by flipping your containers over and see which recycling number they have. Avoid codes 3 and 7 as that’s a sign that the plastic may contain these hormone disruptors. Better yet, pack your vegetables, pasta salad and fruit punch in stainless steel or glass containers and reusable (non-plastic) water bottles to keep the toxins away. If plastic containers are unavoidable, don’t put any hot foods in them as they’re more likely to leach chemicals when exposed to heat.

Although plastic wrap doesn’t contain phthalates or BPA, it can contain different chemicals such as perfluorinated chemicals (or PFCs). These chemicals are suspected hormone disruptors, yet they are widely used in food packaging across Canada. Skip the plastic wrap on your sandwiches and use clean cloth napkins instead.

Whether you use plastic cutlery, Styrofoam cups or plastic plates, disposable dishware can contain harmful chemicals that may leach into your food and drinks. These products also have a high environmental impact during production and disposal. Although convenient and lightweight, plastic or Styrofoam disposables should be avoided whenever possible.

Polystyrene (marked with recycling code #6), contains “styrene” and “benzene” which are linked to increased cancer risk and brain development problems. These chemicals are found in food packaging, utensils and coffee lids as well as in the expanded Styrofoam variety. Polystyrene has been banned in about 30 municipalities in California.

A safer alternative to toxic disposable dishware are recyclable or biodegradable paper plates and cups. Reusable glass dishes from your home are also a good option. Pack them carefully in your reusable tote bag and wash the dishes at home. If that sounds like too much work, turn your picnic into a perfectly portable lunch with individual Mason jar meals 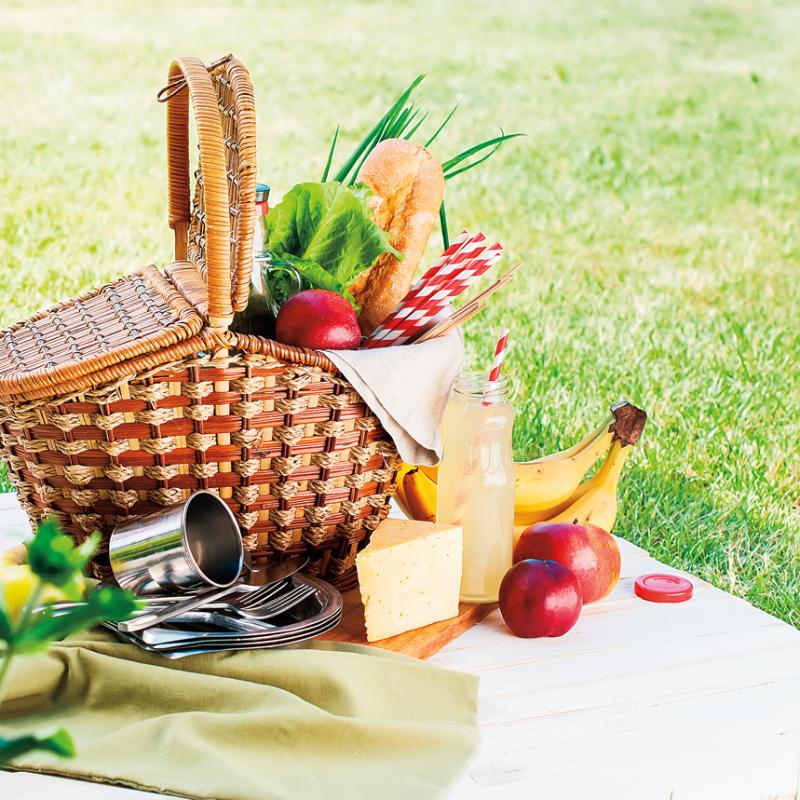 Spending time outdoors is a great opportunity for your kids to run around and play with friends, but sun exposure can be harmful if you’re not careful. Before coating your child in sunscreen, make sure to check the ingredients. Common chemicals such as oxybenzone are found in sunscreen to absorb UV light and “protect” the skin. However, this chemical has been linked to hormone disruption and has the potential to damage cells, which may lead to skin cancer (with extended use).

Keep it mineral and minimal. Zinc oxide is an effective and safe mineral that your skin won’t absorb, and it blocks both UVA and UVB rays. Also, wearing a hat and staying out of the sun during peak hours (11 A.M. – 2 P.M.) are two toxic-free ways to get some added protection.

Stay away from sunscreen sprays because titanium dioxide, a common ingredient, poses a potential inhalation hazard – especially for young children. Avoid sunblocks with “fragrance” or “parfum” on the label because there can be a myriad of hidden harmful chemicals creating that nice smell. Fragrance ingredients are currently not required to be disclosed on product labels, leaving consumers unknowingly exposed to chemicals like artificial musks and phthalates. Many of these chemicals are linked to serious health problems, like hormone disruption, sensitivities and cancer.

After tossing around a Frisbee, frolicking in the playground and feeding the birds, it’s important to keep your kids’ hands clean before eating. Hand sanitizer is a great alternative when soap and running water isn’t available, but there are some things you should know about when choosing the right sanitizer for your family.

Some hand sanitizers contain a harmful chemical called triclosan. Despite being declared as toxic to the environment by the Canadian government, triclosan is still widely used in many personal hygiene products including soaps and toothpaste. This chemical is also a known hormone disruptor and may have negative effect on thyroid function and brain maturation. The U.S. Food and Drug Administration even banned triclosan in hand and body soap last year, but we are still waiting for regulatory action in Canada. Furthermore, disposable wipes, whether they contain triclosan or not, should be avoided simply because of their single-use nature.

The good thing about triclosan is that it needs to be labelled on the product or packaging. So the next time you’re shopping for hand sanitizers, be sure to read the label. Bring along some DIY wipes instead!

With these tips in mind, you can achieve picnic perfection!